Please enter your username or email address. You will receive a link to create a new password via email.

The reopening of the Chapel of the Shroud

The most famous relic in the world

Without any doubt the Shroud is by far the most famous and controversial relic of all of Christendom. It is, as we all know, a long linen cloth in which the body of Jesus would have been laid by Nicodemus once removed from the cross and with which it would have been left in the tomb carved into the rock, given the rush due to the arrival of Saturday Easter in which the Jews could not do any work. This long sheet, the name “Shroud” derives from the Greek word that indicates the sheets, would have been folded in half on the shorter side and would have wrapped the body of Christ both on the back and on the front. At the time of the Resurrection, then, the resurrected body would have passed the cloth, leaving the imprint of the figure that we can see today and remaining folded on itself, with the other bandages inside, as the apostle John saw and speaks about it in the Gospel attributed to him.

It is evident that for all Christians of all confession, who base their faith essentially on the Resurrection of Christ, the Shroud has always been an object of profound veneration, which has also fascinated, and continues to fascinate, many unbelievers. Visiting the chapel that Guarino Guarini designed and built to host it in Turin is an emotion that we at Meet Piemonte want to share with our guests, in a series of tours that will lead you to appreciate this and many other wonders held in Turin.

Go to our tour of historic doorways and shops, including the Jewish ghetto

A story full of adventures

The earliest historical evidence of the existence of the Shroud dates back to the mid-14th century, when a noble French knight donates this extraordinary relic to the collegiate church of his hometown, without specifying, however, how it came into possession of the relic.

Both public ostensions aimed at cashing large sums with the pilgrimages and the criticism and doubts about the authenticity of the relic immediately start, given the importance of the object for the cult and prestige.

Theologians and scientists everywhere are being mobilized both to support their authenticity and to prove that it is a forgery and on both sides weigh the not inconsiderable suspicion that the enormous economic and political interests linked to the Shroud cult determine their different opinions.

In 1453, the cloth was sold to the Savoy family, who retained it until 1983, when Umberto II, the last king of Italy, died. He left the Shroud to the Pope. Saved from a fire in 1532 in Chambéry, the Shroud also escapes the 1997 fire that destroys the chapel built by Guarini and recently reopened to the public, and it is now kept in a transept of the Cathedral under the responsibility of the Archbishop of Turin, commissioned by the Pope to guard it in his name.

The plans for a chapel for the Shroud

When the Duke Carlo Emanuele I of Savoy, who lived between the 16th and 17th centuries, decided to build a chapel dedicated to the Shroud in which it was kept, the relic had been in Turin for a few years, which became the new capital of the duchy in 1563 by the predecessor of the duke, Emanuele Filiberto di Savoia. The design of the new religious building was entrusted to Carlo di Castellamonte, court architect, and then to his son Amedeo, the designer of the Reggia di Venaria, who continued the work, but without reaching a conclusion that would meet the expectations of the court .

The contiguity between the Palazzo Ducale, which later became Palazzo Reale, and the Duomo instead suggested to Bernardino Quadri, the Swiss architect who succeeded Amedeo di Castellamonte in managing the project, to create a chapel that was part of both buildings and that it was accessible as much from the Duomo as from the first floor of the building.

To achieve this purpose, Quadri modified the part of the Duomo behind the apse so that it was circular and raised it to the level of the first floor of the palace. After having built the first level of the dome, however, Quadri realized that the walls were not very stable and that they risked to collapse under the weight of the dome and was thus forced to abandon the project.

The chapel of Guarini 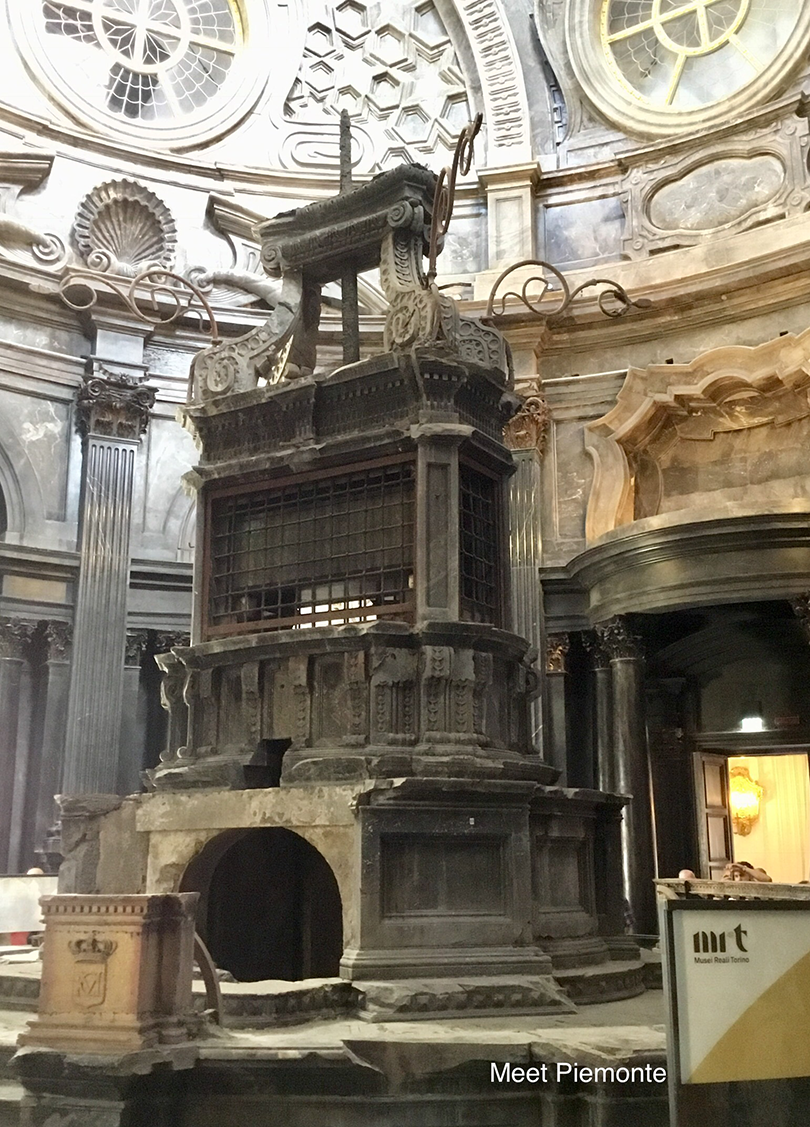 It took the intervention of an absolute genius of architecture as Guarino Guarini to save a situation that was believed by now compromised. This Theatine monk, with a multifaceted activity and an exceptionally gifted mind for mathematical studies, had long traveled through Italy and Europe, working for his religious order both as a teacher and as an architect. In 1666, he was sent to Turin to work at the Church of San Lorenzo, annexed to the Palazzo Ducale, but belonging to the Theatines, and it was during the renovation of this building, where the considerable structural difficulties were solved with innovative solutions of particular value, that he was noticed by the Savoy. 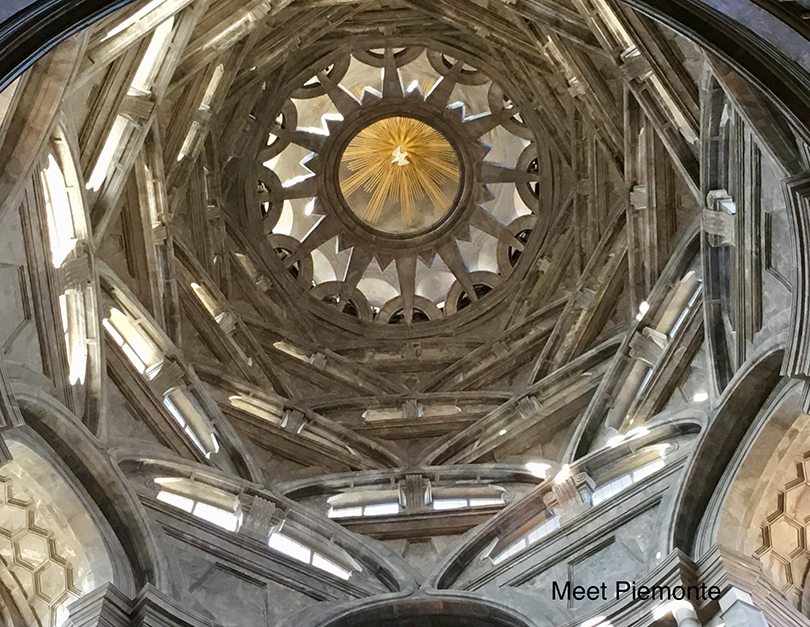 In 1668, therefore, he obtained the task of “Engineer for the Construction of the Chapel of the Holy Shroud” and had to devise a way to complete the Quadri project, obviating, on the other hand, the structural problems that it entailed. The solution adopted was to reinforce the existing structure with three pillars and to create a polygonal brick structure on which there are six huge windows, which have the function of making light penetrate the chapel, as well as to lighten the load on the walls below. Above the structure there is a dome built with a series of arches crossed and separated by twelve ribs surmounted by urns. Finally we find a pointed lantern, with twelve other windows, which gives the structure a very unique and characteristic appearance.

A coffer full of mysteries 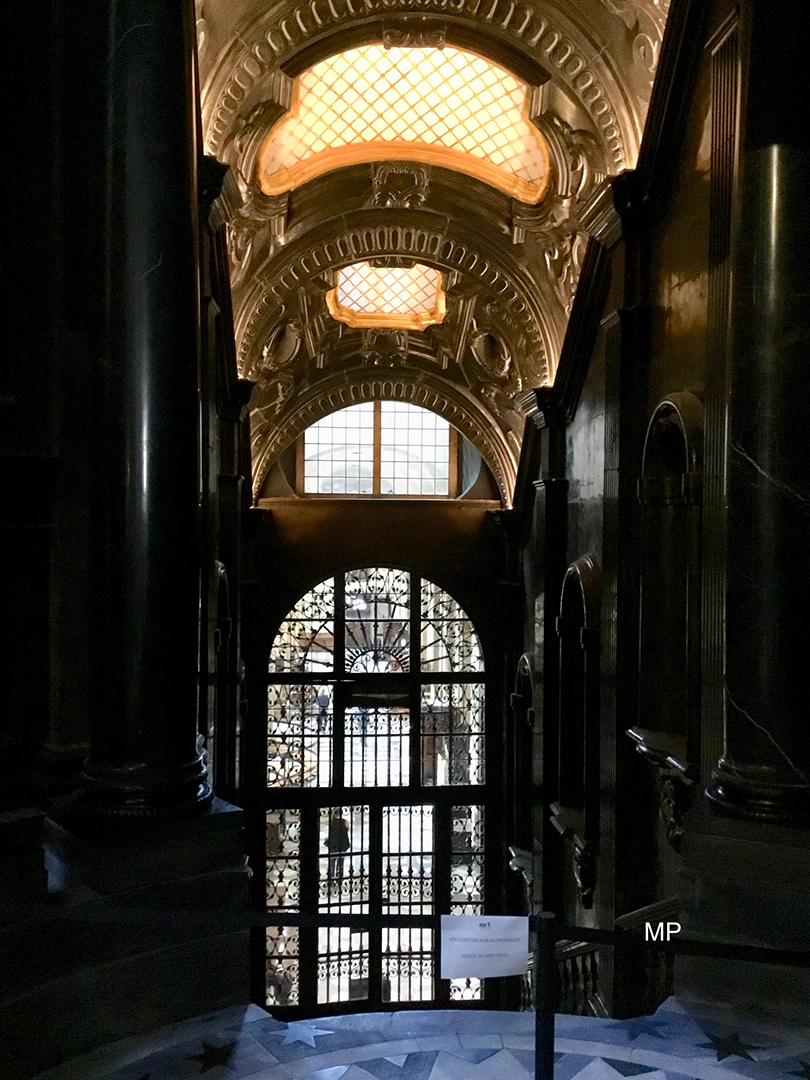 Guarini‘s baroque is, in itself, a type of symbolic architecture, in which numerical references to theological truths are an integral part of the building. The extraordinary mathematical skills and the genius of the architect, on the other hand, leave always surprised all those who admire his works, especially for the originality of the forms and architectural solutions adopted.

With our guided tours, you can also admire not only the beauty of the Chapel of the Shroud, now included in the tour of the Royal Museums, which also includes the Palace, the Royal Armory, the Sabauda Gallery, the Royal Library and the Museum of Antiquity, but also discover the many small and great mysteries and events that, in its long history, have marked this building. 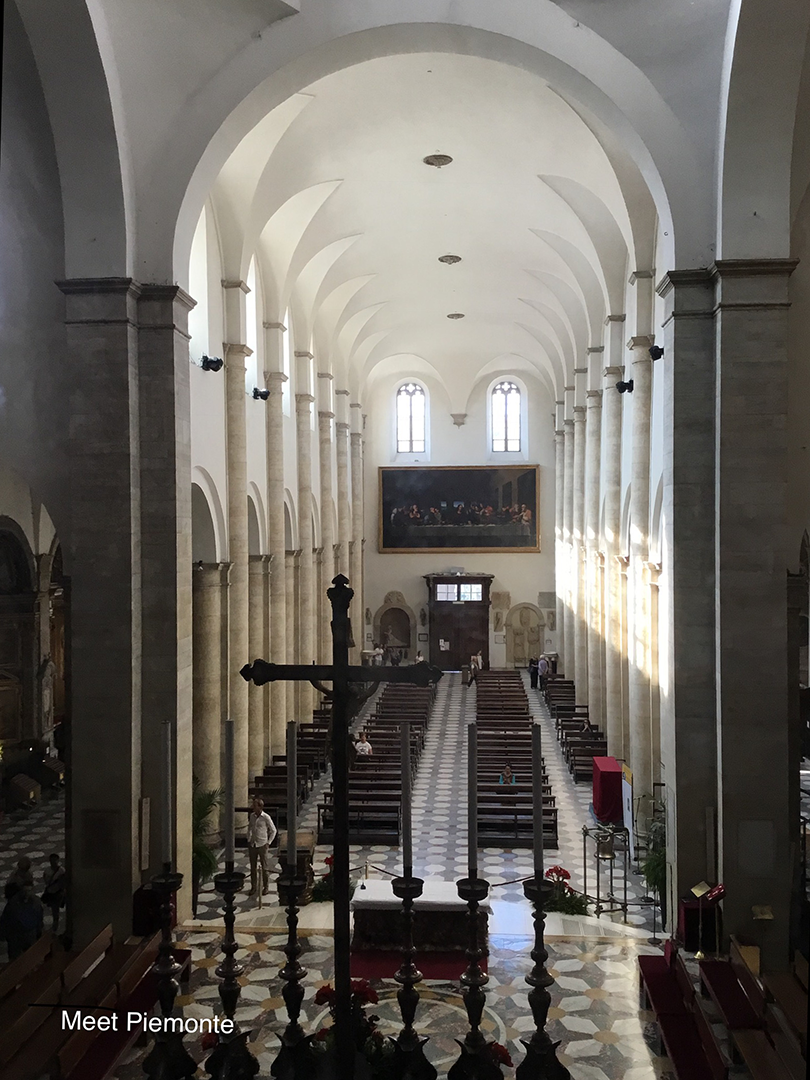 Our tour guides will explain the reasons for the presence of the altar still devastated by the fire in 1997 that occupies the center of the building, the meaning of the shape of the steps of the two staircases that connect the Duomo to the chapel. 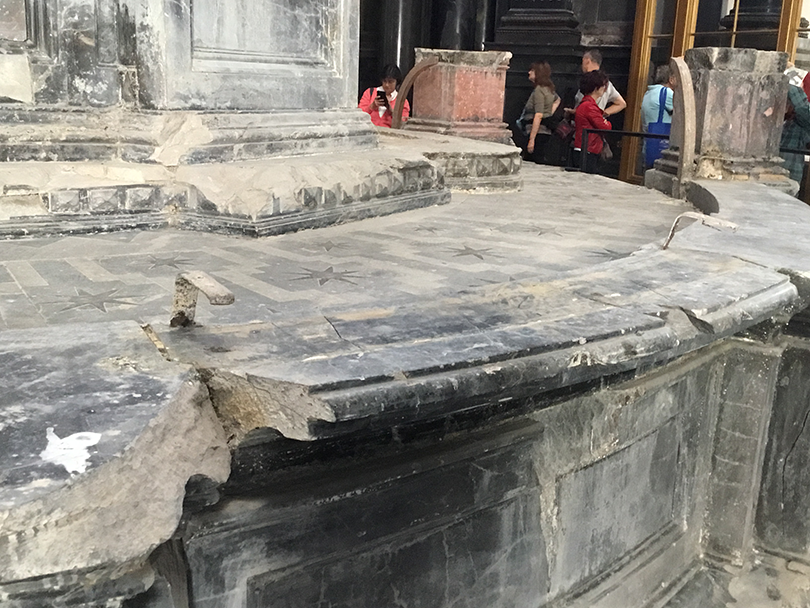 We will also unveil the history of the four monuments dedicated by as many illustrious members of the House of Savoy and the possibility that their bodies will be found in some of them and, of course, the phases of the long and meticulous restoration that has made it possible, after more than twenty years , admire this jewel of art and history in all its splendor.

The tour guide will lead you to decipher the complex symbolism present in the Chapel of the Shroud, both in architectural forms and in decorations.

Go to our tours of Turin

A taste of Piedmont

How Meet Piemonte tours are sustainable? Sustainable tourism in Piedmont is achieved by respecting...

Barolo, Barbaresco, Gattinara and other wines The first step when picking the best Nebbiolo wine...