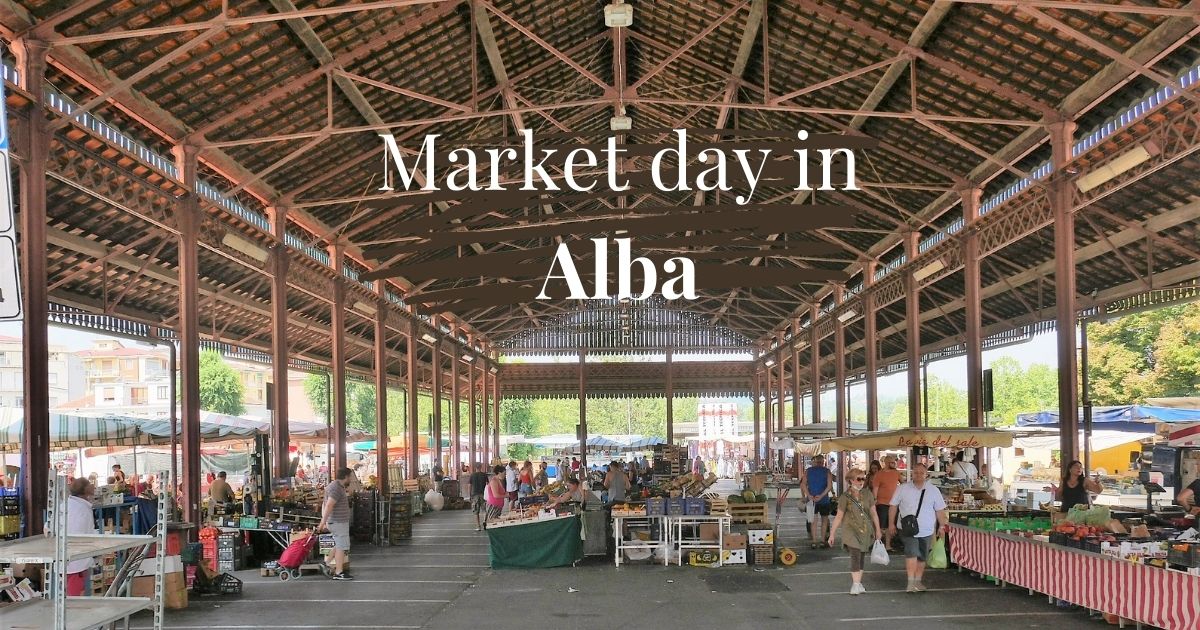 Saturday is market day in Alba: the town wakes up filled with colors and happiness! The Saturday market in Alba combines the tradition with everyday items, attracting tourists and local people, ideal background for the food tour of Meet Piemonte.

It is exciting to walk through the market’s stalls in the narrow streets of the town center, hearing music of street artists and loud voices of street vendors.

The Saturday market in Alba is not the largest in Piedmont, but it has always been an opportunity for gathering for the inhabitants of the surrounding Langhe and Roero hills. Alba and its market have always been an anticipated opportunity for escaping the isolated countryside life and for making possible deals.

Local writer Beppe Fenoglio, born in Alba, depicts these social dynamics in his novel La malora. He perfectly describes how the town was perceived like a metropolis by the eyes of poor farmers.

The Saturday market in Alba stretches out along the main streets and squares of the historic town center. Stalls are set from 6.30am and begin to wrap up after 1pm. There are about 200 vendors of which 60 are food sellers.

The market includes via Maestra (officially via Vittorio Emanuele II), via Cavour, piazza del Duomo (the square of the Cathedral, aka Piazza Risorgimento), piazza Elvio Pertinace. Furthermore, in Piazza Prunotto and Piazza Marconi there are urban sheds, originally conceived for the livestock exhibition and today used for the food market.

The main street in Alba: via “Maestra”

Via Vittorio Emanuele II, locally known as Via Maestra, corresponds to one of the ancient axes of the Roman city grid. It is the main pedestrian street where people go shopping and where locals gather for a Saturday afternoon stroll.

Along this elegant street one can admire medieval buildings, towers sometimes lowered down, precious terracotta decorations on walls and the baroque church named La Maddalena.

A poultry butcher shop – Polleria Ratti – easy to be spotted, is close to one of the oldest medieval towers entirely elevated in stones and still visible. The structure has been lowered to the height of the surrounding buildings.

Some pastry shops and cafes preserve the wooden frames, decorations and original signs that embellish shop windows. These XIX century or early 1900s stores are adorned with mirrors, chandeliers and shelves where merchandise is well displayed. They are an inviting set for enjoying a coffee or a hazelnut pastry.

Market stalls are arranged in the middle of the street, leaving the sides for pedestrian use and due to recent COVID they have been scattered. The market in Via Maestra is mainly about clothing, personal accessories and household items.

Piazza Risorgimento, better known as Piazza del Duomo, is the heart of Alba, overlooked by the Cathedral with its 1800s facade.

Under the arcades of Piazza del Duomo, there is the XIX century Café Calissano, defined by local writer Beppe Fenoglio, “the Coffee shop of Lords”.

Fenoglio lived in the building facing the square, on the opposite side of Café Calissano, where his father ran a butcher shop and where now takes home the Fenoglio Study Center.

These are just some of the stops of an itinerary linking places where Fenoglio lived or set his novels, inspired by personal life experiences. In the case of Café Calissano, the writer praised the fragrance of the coffee, that invaded the square, mixed with the acrid smell of tobacco.

The current owner maintains the charm of a literary café, a title that it had earned over time by hosting writers and poets with a certain frequency.

We need to move away a little from the market stalls which make it difficult to see buildings behind. Giving the back to the church, one can admire the Town Hall and medieval towers elevated in bricks.

Not far from the Café Calissano, in the middle of the square, it is possible to see on the first floor the dining room of Piazza Duomo restaurant, recognized with three Michelin stars, one of the few in Italy. Pride of the city, chef Enrico Crippa and members of his crew, can be seen going in and out the restaurant, in the alley that opens up under the arcades of the square.

Market day in Alba: the history

Market day in Alba is the chance to dig a bit into the evolution of the market itself and to spot historical buildings along Via Cavour.

Casa Giuliano, also known as Sacco or more simply Loggia dei Mercanti, is noted for the uniform façade, today covered with plaster but originally built with exposed bricks. The five pointed arches of the front porch facing Via Cavour, together with the two strings of clay tiles that mark each floor, give to the building a compact appearance.

This singularly large porch most likely constituted the site of the grains market, which, in Piedmont, was often covered and close to the main market.

It is uncertain whether this building was built specifically for this function or if it came later on the pre-existing covered grain market. In fact, until the end of the XVIII century the area next to the Loggia dei Mercanti was used for the trade of cereals and grains in general.

Piazza Pertinace is home of the-so-called Mercato della Terra, a display of traditional and local food purveyors, ideal background for the food tour in Alba, where guests get to know ingredients and recipes.

This market takes place every Saturday morning since 2010 and it is supported by Slow Food and by the Town Hall of Alba.

It differs from the rest of the food market for being exclusively held by small and artisanal food purveyors and farmers, selected within a radius of 50 km, according to the principles of the Slow Food association.

Each vendor is constantly monitored and must respect quality standards.

The food tour in Alba, throughout its five tastings in hand-picked shops and traditional restaurants, is an opportunity to discover recipes and ingredients, their roots and use throughout history.

Among them, we like to stop at the honey stall. Being Piedmont a region with mountains, hills and plains, flora is highly varied and so are tastes and flavors of honey. There is sunflower honey, spruce and rhododendron. Some are even more rare such as oak, raspberry, mint, rapeseed.

The Slow Food market in Alba is a journey in the culinary tradition of Piedmont, from cheese producers (Tuma di Langa is made with milk of an indigenous sheep of the Langhe hills), salami, hazelnut delights, seasonal fruit and vegetables.

During the weekends in October and November, when the International white truffle Fair is open, it si possible to taste egg-pasta noodles (called tajarin) or a fried egg topped with fresh shaved white truffle. These traditional dishes are prepared by osterie (casual restaurants) of the surrounding area, mentioned on the guidebook “Osterie d’Italia”.

This event represents the last step of the journey of our products: from farmer to table.

The covered produce market in Alba

In Piazza Marconi takes place the food market of Alba with all sorts of products including some that are imported from other regions or from abroad, like citrus or exotic fruit. The iron-wrought structure is a perfect shelter for vegetables, flowers, stalls selling take-out dishes and those specialized in fish.

However, there are more traditional vendors like the anchovies and salted cod stall. These two kind of fish were, for centuries, the only ones available in the local cuisine, being the sea located days of walking away.

The nearby Piazza Prunotto is also home of a covered market where about 50 farmers displays their vegetables, fruit, aromatic herbes, eggs as well as live chickens! In this same square farmers make deals on tractors and other machineries used in agriculture.

Where to park in Alba on a Saturday

Market day in Alba can turn into a nightmare when looking for a parking lot! Here’s a list of suggested parkings, among private, public, covered and open-air stalls.

Market day in Alba is not just on Saturday: on Wednesday there is a smaller one in Piazza San Paolo. Tuesday and Thursday morning a small food market takes place in Piazza Marconi and Piazza Prunotto.