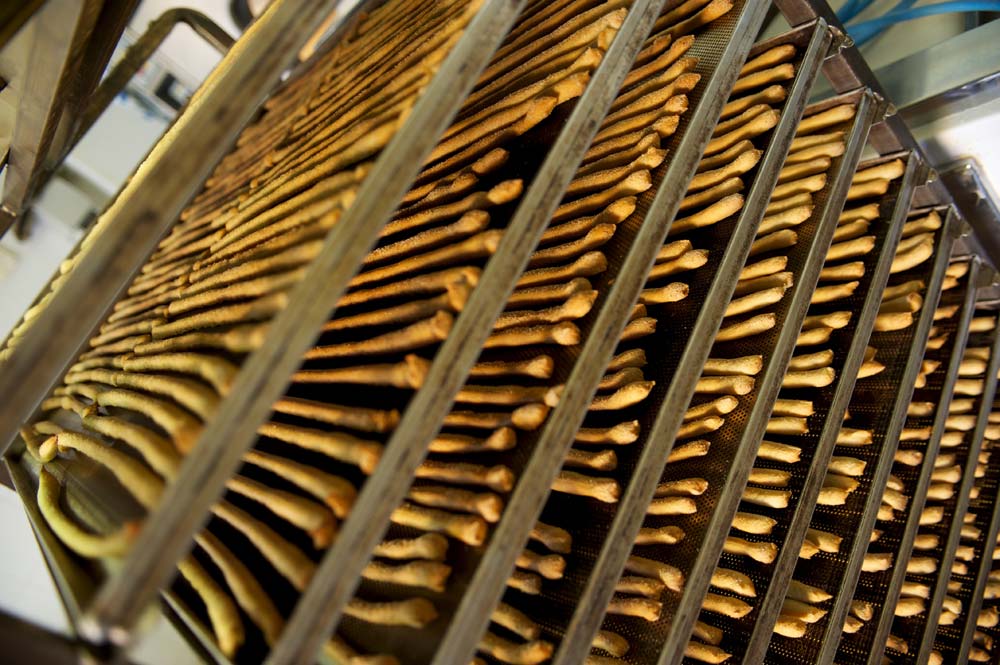 The iconic food of Piedmont

The noble origins of grissini – Italian for breadsticks – are linked to the Piedmont region of Italy and to the House of Savoy. This is just one of the many stories shared with guests on Meet Piemonte’s food tours in Turin or Alba.

As one of the most representative elements of the cuisine of Piedmont, breadsticks lie on tables of restaurants and private homes next to the bread.

Their popularity stands in being crunchy and tasteful, making them everyone’s favorite pairing for any meal, snacks or midnight whim.

The origins of breadsticks in Piedmont

Grissini is the Italian word for the iconic crispy breadsticks which date back their origin around 1670.

The noble origins of grissini are connected to the childhood of the  Duke of Savoy, Vittorio Amedeo II (1666-1732). The doctor of the ducal palace recommended that the weak and young duke would eat something easily digestible hoping to stimulate his flagging appetite.

Therefore, a local baker Antonio Brunero, came up with the idea of breadsticks.

The historical background in which the noble origins of grissini find the light, is quite intricate.

Vittorio Amedeo II of Savoy inherited the title of duke very young since his father passed away. The French mother reigned with rather domineering tendencies until the day the child grew up and showed a strength of character and a sensitive intelligence.

In facts, in the first quarter of the 1700’s he inevitably had to participate in the European political, diplomatic and military events of that time.

After a few years since Vittorio Amedeo began to eat breadsticks, he had to face the French troops that kept Turin under siege for days. The young duke defeated France and as a result, he was crowned King of Sicily with great pomp in 1713, a title exchanged for that of Sardinia in 1720.

Grissini in the city of Turin

As proud as Piedmont is about its grissini, local people believe breadsticks gave the strength to the Duke to become a King. This important achievement had a strong impact on the city as well.

Stunning baroque architecture was commissioned in an effort to make Turin look as the capital of the new kingdom and elegant as other royal cities of Europe. The entire region benefited from those events, including the University, already founded in 1405, which was then expanded.

How breadsticks where invented in Piedmont

Beside the story of Vittorio Amedeo II, it looks like there are alternate explanations attributed to the noble origins of grissini. According to some, Vittorio Amedeo’s father, Carlo Emanuele II, in 1668, was concerned about the possible spread of an epidemic. He asked bakers to make a more hygienic bread and Brunero created these sticks which are less likely to get moldy and spoil because they contain less moisture than loaves and rolls.

The noble origins of grissini – Italian for breadsticks – according to some others, are even older and their name would come from “grissia” (ghersa in dialect)  the name given locally to bread loafs. In the 1300s, following inflation, bakers started making bread smaller and smaller to the point that people would use the name “grissino” as a diminutive.

A fourth theory – or better call it a legend – says that Brunero may not deserve all the credit given to him: in 1643 a new “extravagant” bread, described as “long as an arm and very thin” were reported on a travel diary written by a Florentine abbot, Vincenzo Rucellai, who traveled to Chivasso, a town just outside of Turin.

Thereby, we can assume that Brunero’s invention was probably a variation of an already existing delicacy.

The House of Savoy turned out to be the first enthusiasts of this specialty: many heirs of Vittorio Amedeo II were known to eat breadsticks almost everywhere, even during theatrical performances, like Carlo Felice (1775-1831) or Carlo Emanuele III that purchased a large container specially made to hold the delicate delight and transport it on his honeymoon in 1724.

How grissini are made

The noble origins of grissini – Italian for breadsticks – are found in the so-called Robatà, term that comes from the local dialect and means rolled. Made only of flour and water, their shape is still given by hand resulting in bigger and knobby sticks, whose texture is quite hard.

Over time, some bakery opted for flatting breadsticks rather than rolling, obtaining a much crispier product (in Italian “grissini stirati“).

Nowadays, and especially in Alba’s bakeries, it is common to find breadsticks made with olive oil and passed in corn flour. While the exterior rough surface adds more crunchiness to the breadstick, the olive oil makes them even more tasteful and softer.

Visiting a bakery’s workshop in one of the food tours in Piedmont it is an experience itself.

Depending on the size of the bakery, there might be two or more people specialized in each of the steps required to shape breadsticks: cut the dough, roll it, arranging them on the backing tray and finally putting them in the oven.

The food of Turin across Europe

Grissini are mentioned on several books and even in occasion of important historical events: described as “little sticks of bread consisting entirely of crust” or as “little batons”, where appreciated by Napoleon, who conquered Turin in 1801 and sent them to Paris.

Friedrich Nietzsche, while living in Turin in the 1880s, wrote about the local population being fond of grissini but he preferred bread rolls, with which he was more familiar.

Food tours in Turin and Alba

Breadsticks are one of Piedmont‘s signature product which can be found in bakeries and on the tables of restaurants.

They can be served as a snack, with an aperitif or a glass of wine. During our traditional meals are perfect with starters and appreciated for their lighter texture compared to regular bread loafs. Some pastry shops sell them covered in dark chocolate, make them ideal for a sweet break.

Food tours arranged by Meet Piemonte in Turin and Alba include stops to historical bakeries where the aroma of baked grissini can be smelled from the street.

One of our favorite stops is the Cravero bakery in Barolo where breadsticks are baked in the oven  located next door to the shop. Situated half way along  the main and only street of the small village, Cravero’s bakery fragrant smell often reaches the imposing medieval castle.

How to eat breadsticks

In Piemonte we tend to judge a restaurant just from the quality of  breadsticks, better if well presented on the table, wrapped in a linen napkin. Individually wrapped grissini are great to be transported in a backpack but  in a good restaurant in Piedmont, people expect to find artisanal breadsticks.

You can roll a slice of ham around it or plunge it in a creamy sauce like a gourmet truffle spread or pesto. There are even soups prepared with crumbled grissini and broth.

Back in the day, small fried pancakes were prepared with crunched grissini, eggs and milk.

Probably the most innovative way to recycle them is the recipe of Michelin-star chef Davide Scabin. One of his signature dishes in its restaurant Combal.Zero, is a Fassona beef fillet steak cutlet, breaded in a crunchy breadstick crumble. Once the meat is cooked, is taken to the table on a wooden fire obtained by burning rosemary and other aromatic herbs which leave to the preparation an ancestral smoked final taste.