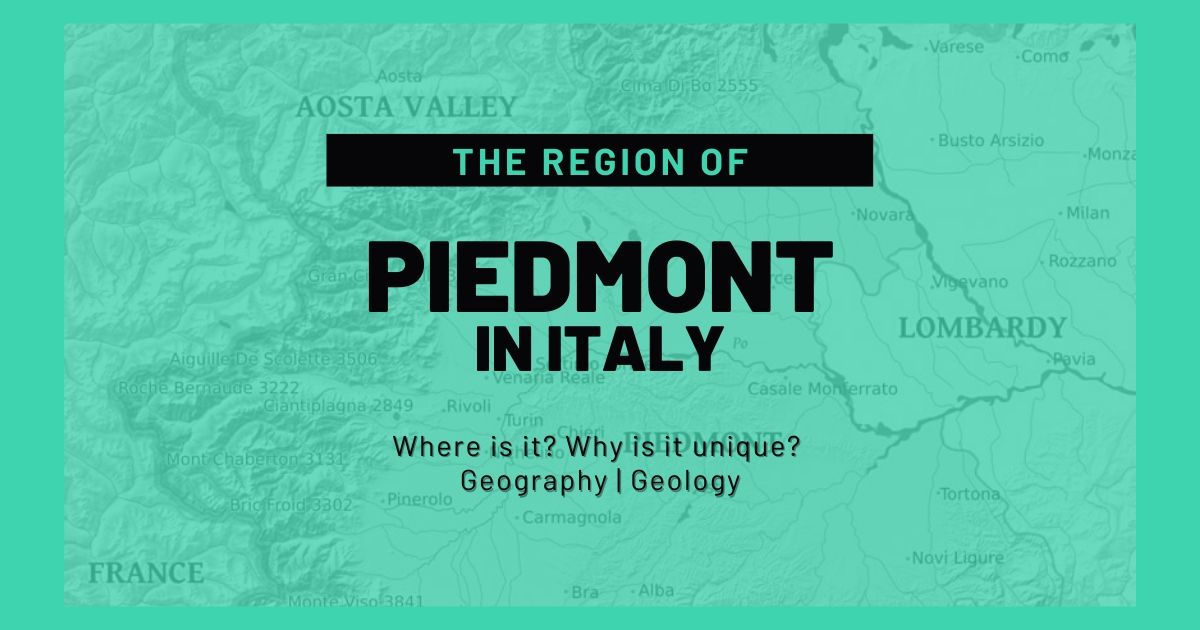 Where is Piedmont in Italy?

The Piedmont region of Italy, in Italian Piemonte, spreads on over 9,700 mi² (25.300 sq km) of land and counts a population in excess of 4,300,000 inhabitants. Piedmont is the second largest Italian region by extension after Sicily.

It borders France in the west, Switzerland in the north, Lombardy on the east. The southern side is naturally defined by the Apennines mountains which divide the region from the Liguria region.

The Mediterranean coast is, therefore, just a short drive away.

The vicinity to Milan, the French Riviera, Portofino and lake Como make the Piedmont region of Italy accessible from all directions through a well connected net of highways and railroads.

Moreover, Piedmont is easily reachable by plane through the airport of Turin and the nearby Milan Malpensa and Genoa.

The geography of the Piedmont region of Italy

The geographical configuration of the region consists of flat plains (32%) and a southern nucleus of hills (20%) surrounded by mountains (48%). Consequently, we can identify four main areas based on type of landscape:

With the ease of access and vicinity of such natural attractions, Piedmont offers a wide array of activities that appeal families, food and wine enthusiasts, outdoor lovers and history buffs.

What does Piedmont mean?

Piemonte holds in its name the reference to the conformation of the region, located at the foot of mountains: “pie” stands for foot and “monte” for mountain. The name of the region perfectly describes its position at the foot of the Alps, which surround plains and hills on three sides.

The toponym – from latin Pedemontis – was probably used for the first time in the early Middle Ages but back then it did not correspond to any administrative nor political territory.

In facts, the first native tribes of the region where called Liguri and even during Roman times, that was the word used to identify the entire land between the sea and the Alps. Today, Liguria, is the name of the narrow region that stretches from the French border to Tuscany, facing the Mediterranean.

Over time, the mountain-range called Appennines, became the natural political and administrative barrier between the coastal region of Liguria and the mainland called, finally, Piemonte.

The geological origins of Piedmont

In origin, the Alps drew the edges  of a huge bay which thirty million of years ago was completely flooded by an ancient sea, called Tetide.

The point where nowadays the Alps begin to elevate from the plain can be imagined as the previous beach line where waves of the sea used to crash.

Then, the remaining central body of the Piedmont region of Italy was slowly filled with sediments brought down by rivers and later eroded.

A sharp transition from the high elevations of the Alps to the flat plain is peculiar to Piedmont: in other Italian regions the passage is smoother because of a mid-range of alpine foothills standing in between the Alps and the lower valleys (Prealpi).

That range of foothills does not exist in the western section, probably due to the collapse of the bottom of the ancient sea. This event took place about fifteen million of years ago.

A complicated and fascinating geological formation of Piedmont can be considered as the real treasure of the region. The former sea and the consequent floods, erosion and earthquakes gave birth to a unique yet special soil composition.

The prominent wines of Piedmont as well as the pungent aroma of white truffles find reason to exist because of the soil formation, along with other factors.

As evidence of this past there are recent finds on the hills of the Piedmont region of Italy. The biggest one of the last decades is the skeleton of a whale, a dolphin and much else found in the countryside near Asti and kept today in the fossil museum of the city.

In the Piedmont region of Italy the Alps stretch from the lower peaks bordering Liguria and the southern French border, up to the Simplon Pass on the way to Switzerland.

The northwest corner of the Alps where the giant Mont Blanc stands – highest peak of Europe – is actually part of the Aosta valley, a separate Italian region.

Monviso is, therefore, the highest peak in Piedmont, with its 3841 m above the sea level (12,600ft) a favorite summer destination for trekkers and outdoor lovers.

The southwest alpine valleys are less touristy but equally beautiful as other popular alpine resorts. Located in the province of Cuneo these valleys are crossed by an extensive net of trails and can be reached within short drives from Turin, Alba and Saluzzo.

Valle Stura leads to France through the alpine pass, Colle della Maddalena. The valley counts one of the largest cross-country skiing trail and in summer one can complete breathtaking hikes up to disused military watching stations, crossing eventually the French border.

Valle Grana and Valle Maira hold to the ancient language spoken across southern France. What seems to be a dialect, it is in fact a deeply rooted culture that involves food, music, traditions, costumes. Called Occitania in Italian and Occitaine in French, this culture is considered to be a common cultural background of people leaving on opposite sides of the Alps.

Valle Varaita is one of the main access to the Monviso. In summer, professional alpine guides take tourists to complete scenic trekking around the highest peak of Piedmont, up to an elevation where snow never melts.

Cozy mountain cabins and rustic accommodations are available as the result of restorations of former farms. Abandoned hamlets on the slopes of secondary side valleys, found new life and welcome tourists who are looking for nature and silence.

Winter skiing in the Piedmont region of Italy

In winter, ski slopes are all over but the most renowned and well equipped are the Alps of Alta Val Susa where many competitions of the Winter Olympic Games took place back in 2006.

The lake district of Piedmont, in Italy

Set at the foot of the Alps in the northern part of Piedmont, the lake district counts a number of water bodies of all sizes.

The two largest lakes of Piedmont are lake Maggiore and lake Orta. They have the same glacial origin of other Italian lakes such as lake Como and lake Garda, located in other regions.

Lake Maggiore became an international tourist destination with the opening of the railroad line going to Switzerland through the Simplon Pass, in the early 1900s. Still today, a number of luxury hotels and beautiful botanical gardens are set around the towns of Stresa and Pallanza.

The Borromeo family of noble origins transformed a former rock in the middle of the lake into a Palace of beauty and pleasure. Prominent guests stayed throughout history, including Napoleon. These properties are a treasure cove of art set on the quiet water of lake Maggiore where Meet Piemonte can arrange private tours and events after the public hour.

Closer to the city of Turin, stands the Avigliana and Candia lake a favorite day trip for  enjoying sports and nature.

The wine region of Piedmont

Wine is produced around most of the Piedmont region of Italy. The area set at the foot of the Alps, just west of lake Maggiore and Milan Malpensa airport, is known for the cultivation of Nebbiolo grapes. Different types of wine are bottled in northern Piedmont: Gattinara, Ghemme, Colli Novaresi and more.

The countryside north of Turin resists to an intense industrial sprawl with a significant production of Canavese wines and Erbaluce.

The foot of the western Alps near the town of Saluzzo has its own grape cultivation and wine production but the most extensive wine area is located in southern Piedmont.

Langhe–Roero and Monferrato are the names of three different hills districts that were listed as a UNESCO World Heritage Site in 2014 for the beauty and for the historical meaning of the landscape.

Langhe are around the town of Alba and the wine production is predominantly in the lower hills fenced off in the northern part by the river Tanaro.

The upper Langhe, in Italian “Alta Langa”, are the ones going south, toward the Appennine. Over there the economy is different and so is the landscape, much wilder with meadows, hazelnut grove and cheese production.

With a soil mainly made up of clay mixed with minerals left by sea water, Langhe hills where among the first to emerge from the water.

Their shape generates waved hill crests pointing all in the same directions, from southeast to northwest, like parallel long bodies of land. From this unique configuration, according to some, comes the origin of the name, from Italian “lingua” – tongue of land – transformed into “langa”.

Each hill has a steep side that holds up the next, gentle slope, generating a unique sun exposure that is reflected in cultivation of grapes (Barolo, Barbaresco, Dolcetto).

North of the river Tanaro stands Roero, a more sandy and geologically younger territory. It is well known not just for wine (Nebbiolo, Arneis) but for fruit crops such as strawberries and peaches.

The name Roero was given after the noble family of Asti that in the middle age conquered and bought a number of castles and estates to the point of controlling the entire geographical area.

Geologist have proven how the modern bed of the river Tanaro is the result of a long and slow erosion. The change of position of the river, over time, is responsible of the formation of picturesque cliffs and carved hill slopes.

There is a territory considered more historical than geographical because it never had well defined political nor physical borders.

The Marquis of Monferrato was a noble family that for centuries controlled the area between the Po river and the foot of the Appennines. Their family line extinguished due to the lack of male heirs and other dynasties replaced them until the Savoy family took over the entire Piedmont.

The Monferrato never had a capital but these dynasties moved around from palace to palace. Asti, Casale Monferrato and Chieri were their preferred cities.

Today, the Monferrato hills are less touristy than the area near Alba and Barolo with nothing less in terms of views and beauty.

The main wines are Barbera d’Asti and Moscato. They find their best environment in the southern province of Asti toward the towns of Nizza Monferrato and Canelli. The northern Monferrato is home of other local wines such as Grignolino and Freisa.

A number of Romanesque country churches and chapels dating back to the XI and XVI century dot the northern countryside. Pilgrims used to travel on the way to Rome through the Piedmont region of Italy.

Overall, the great thing about the Monferrato is a wider agricultural area that has not been massively overtaken by vineyards. The outcome is a more balanced environment, with some uncultivated land, in which the white truffle of Alba can still grow spontaneously.

The southern tip of the Monferrato hills, on the way to Genoa, are renowned for the Gavi white wine.